The 104th Wolfpack Co. (otherwise known as "Wolfpack"), was an elite unit or battalion of Clone Troopers during the Clone Wars led by Jedi General Plo Koon, Clone Commander Wolffe (who was under the position of Veteran Clone Officer), and eventually Admiral Coburn

The battalion was mainly deployed on rescue missions, as well as stealth and relief missions. They mainly did what the Republic Commandos couldn't achieve (as with whenever they were pre-occupied with various missions); as well as commonly being assigned to the 212th Attack Battalion and the 501st Torrent Co.

Towards the end of the Clone Wars Era, they eventually had a Republic Naval Officer under the rank of Admiral known as Admiral Coburn, who replaced Wolffe's duty for commanding starship fleets due to him being involved in more combat.

The Battalion's original markings originally were a rusty-brown color, but eventually became a grey-blue teal color. (Yet, Wolffe was originally the only member who had teal markings; aside from Comet, who was one of the later specialts or officers to have such markings.)

Their symbols also eventually changed, as well as Commander Wolffe's helmet design for both Phases of armor that he's worn.

"Wolfpack" and Commander Wolffe are named after the several different species of creatures and aliens who very much do resemble wolves. (Such as the Gundark and the Anooba.)

The battalion was originally referred to as a squad (and is still commonly mistaken as one), mainly due to the way that only small squads and platoons of Clones were originally shown on-screen up until the Clone Wars Season 4 episode "Mercy Mission" which revealed the battalion's initial size.

Boost and Sinkers original character models briefly appeared in a scene in the Clone Wars film during the Teth briefing sequence.

Oddly, Clone Pilot Warthog was actually seen in both versions of his armor during Clone Wars Season 4; to whom he was shown or seen wearing his Phase 1 armor in the "Mercy Mission" episode, and was seen wearing his Phase 2 armor in the "Escape From Kadavo" episode. This particular occurence, was both a goof and a transitional moment. Hence, the Clones were in the process of transitioning to Phase 2 armor in Clone Wars Season 4.

Boost and Sinker didn't officially receive new markings until their transition to wearing Phase 2 armor. (Similar to what occurred with Clone Pilot Warthog.)

An example of Wolfpack's original markings. (Sergeant Boost was one of the original members to still have the markings.) 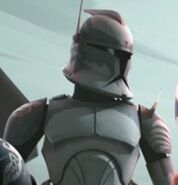 Commander Wolffe in Phase 1 armor. Clone Troopers in Wolfpack had similar markings like with what Wolffe had.

A Phase 1 ARF Scout Trooper with two Phase 2 Clone Troopers in the battalion.

Admiral Coburn with Wolffe, Comet, and Sinker towards the end of the Clone Wars.

To avoid confusion with Boost and Sinker's Phase 2 armor: Boost's helmet has the ragged gray markings under the visor. Sinker has the gray chin and "cheeks."

An example of Warthog's Phase 1 armor as seen on his Hasbro figure.
Community content is available under CC-BY-SA unless otherwise noted.
Advertisement